Division 16 Change of Watch 3Dec17
All Photos and story from this section courtesy of FSO -CS Christopher M. Orlando

US Coast Guard Auxiliary Flotilla 16-07 Point Pleasant Beach, NJ participated in and was honored at the Division 16 Change of Watch at the Crystal Point Yacht Club on 3Dec17.

For 16-07, Bill Iwanyk and Brenda Revior-Feniello were sworn in as Commander and Vice Commander for the 2018-2019 term.
Multiple members of 16-07 were sworn in as Division 16 Staff Officers: William Castagno (Navigation Systems), Christopher M. Orlando (Secretary/Records) and Bill Iwanyk (Vessel Examinations). Flotilla 16-07 was also honored with the U.S. Coast Guard Auxiliary National Commodore Achievement Award for outstanding contribution over 60 years.

At our November Business Meeting we honored two of our members: Robert Daraio and David Witherspoon. They were awarded Auxiliary Annual Service Performance Awards: Bob for his 15 years of service and David for 5 years. These volunteers devote many hours to their missions, with much success, gaining recognition at both the Flotilla and Division levels.

US Coast Guard Auxiliary members James Picciano and Gregory Porteus, Flotilla 16-07 5th Northern Region, were recently honored by the US Department of Veterans Affairs “in appreciation of the outstanding and distinguished commitment, dedication, and assistance that Launch 5 provides to the veterans of the VA Hudson Valley Healthcare System. We thank you for the ongoing therapeutic support for our nation’s heroes.”
Greg and Jim provide a few hours of relief to the veterans by taking them out on Greg’s boat, Launch 5, periodically to sail up and down the Hudson River. Recently, Jim obtained tickets for the veterans to attend a football game at West Point on Veterans Day.

Our October Flotilla 16-7 meeting at Station Manasquan Inlet recognized several members for their achievements.  Awarded for the Auxiliary Annual Service Award were:  Alice Schroth, Paul Harren, Dan Fuchs and Ted Hall.  Ted was also awarded additional commendations for his achievements.  Our newest member, Bill Lang, took his Oath of Membership and was warmly received by the members.

All Photos from this section courtesy of FSO - MT John Fisher

The member training meeting of Flotilla 16-07 on 01 March 2017 featured Auxiliarist Ellen Voorhees of Flotilla 07-09 in Lacey Township, NJ and USCG LTJG Kathleen Dillon of Joint Base McGuire/Dix/Lakehurst as guest speakers. The topic of discussion was the Coast Guard Atlantic Strike Team (AST) – what it is and what it does. 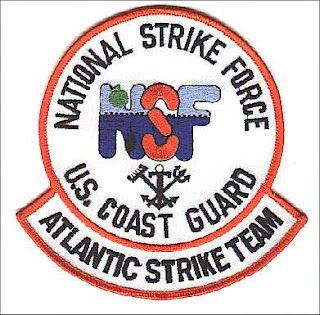 The Atlantic Strike Team (AST) is one of 3 Special Teams that make up the National Strike Force. It is a vital national asset comprised of a unique, highly trained cadre of Coast Guard professionals who maintain and rapidly deploy with specialized equipment and incident management skills any time to any place or hazard.The AST is recognized worldwide as an expert authority in the preparation for and response to the effects resulting from oil discharges, hazardous substance releases, weapons of mass destruction events, and other emergencies on behalf of the American public.


Miss Dillon, who is the Auxiliary Liaison Officer for the AST, works in the Incident Management Department at Joint Base. She indicated there are three Strike Teams – the Atlantic, the Pacific, and the Gulf Coast. They follow the Incident Command System in dealing with Oil/Hazmat Responses, National Security Events, and Natural Disaster Recovery. At a response site, the Teams provide air monitoring, contractor oversight, and decontamination. Their caseloads comprise fifty-four percent chemical/Hazmat responses and forty-six percent oil salvage responses. The three strike teams are not limited to just the United States. They have the ability to travel anywhere in the world to handle a crisis.


Mrs. Voorhees, who is the Auxiliary Unit Coordinator for the AST, spoke of the role the Auxiliary plays at AST headquarters. The eight Auxiliary watchstanders monitor external personnel and traffic flow at the Joint Base, and maintain a telephone watch, screening and transferring calls to appropriate offices. During the time period 2014-2016, the Auxiliary logged 6,543 watchstanding hours and 416 support hours in assisting the Atlantic Strike Team, allowing regular active duty Coast Guard personnel to pursue other duties.

On Saturday, 25 February, 2017, Flotilla 16-07 presented its first About Boating Safely program of the season to 19 students. The class, a mixture of young and old, were very grateful and congratulated us on a fine presentation.

We welcome your comments on postings at all Coast Guard sites/journals. These are sponsored by the U.S. Coast Guard to provide a forum to talk about our work providing maritime safety, security and stewardship for the American people to secure the homeland, save lives and property, protect the environment, and promote economic prosperity.

The information provided is for public information only and is not a distress communication channel. People in an emergency and in need of Coast Guard assistance should use VHF-FM Channel 16 (156.8 MHz), dial 911, or call their nearest Coast Guard unit.

All comments submitted are moderated. The Coast Guard retains the discretion to determine which comments it will post and which it will not. We expect all contributors to be respectful. We will not post comments that contain personal attacks of any kind; refer to Coast Guard or other employees by name; contain offensive terms that target specific ethnic or racial groups, or contain vulgar language. We will also not post comments that are spam, are clearly off topic, or that promote services or products.

If you have specific questions regarding a U.S. Coast Guard program that involves details you do not wish to share publicly please contact the program point of contact listed at http://www.uscg.mil/global/mail/

The U.S. Coast Guard will not collect or retain Personally Identifiable Information unless you voluntarily provide it to us. To view the U.S. Coast Guard’s Privacy Policy, please visit: http://www.uscg.mil/global/disclaim.asp

Any links provided to a U.S. Coast Guard presence on other third party sites is for your reference only. The U.S. Coast Guard does not endorse any non-government websites, companies or applications.

Editorial content on this site is for informational purposes only and not authority for action. Views and opinions expressed do not necessarily reflect those of the Department of Homeland Security or the Coast Guard.